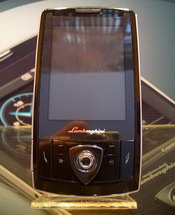 Asus ZX1 Lamborghini Windows Mobile Smartphone. Asus, the Taiwan-based electronics giant launched the ZX1 Lamborghini branded PDA Phone at the CeBIT 2008. It will sport such goodies as HSDPA support, GPS, WiFi, Bluetooth, while Qualcomm's 520 MHz CPU will provide the processing power for Windows Mobile 6.1. It's "just like the iPhone" according to our friendly ASUS guide.

The picture was taken during the CeBIT 2008 which is currently taking place in Hanover, Germany. The device is expected to fetch an unsubsidized €1,000 ($1,500) price tag when this 3G world-phone launches in Europe this May.