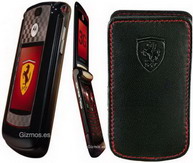 Motorola RAZR2 V9 Ferrari Edition. Motorola is reportedly working on a version of the RAZR2 V9 that would also wear the Ferrari brand. Motorola V9 RAZR2 Ferrari is still the same handset with 2.2" display, 2 megapixel camera and HSDPA connectivity.

The bad news for Ferrari fans in Europe and U.S. is that Preliminary reports tell us that Moto RAZR2 V9 Ferrari edition will only be marketed in Latin America and Asia.

MultiCellPhone | Published on Thursday, May 08, 2008 in cell-phone, devices, motorola