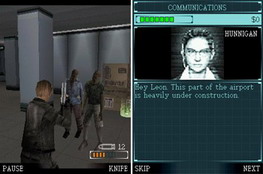 The game, part-based on the upcoming October theatrical release in Japan full-length CG motion picture of the same name, focuses on the release of a deadly virus by a terrorist at a US airport and follows series favourites Leon Kennedy and Claire Redfield, as they attempt to destroy the virus and prevent it from being dispersed across the country. Resident Evil Degeneration is the first full-length CG motion picture from the Resident Evil series, widely considered to be the benchmark of the survival horror video game genre.