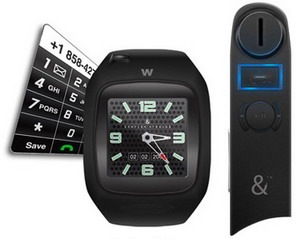 You're probably already aware of the LG GD910 and Samsung S9110 watch phones, and What's now? Kempler & Strauss has launched a watchphone called the W Phone which is claimed as the smallest watch phone.

The W Phone from Kemplar & Strauss will be able for $199, unlocked.