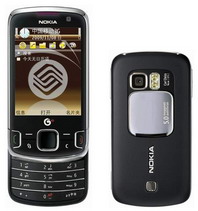 Nokia has announced the Nokia 6788, its first device for TD-SCDMA - China's domestic 3G standard, at an event in Beijing. The Nokia 6788 is the result of close collaboration between Nokia and the world's largest mobile phone operator, China Mobile.

The Nokia 6788 is specifically designed for China Mobile's network and offers rich data services. It is an all-in-one device that provides its users with faster Internet speeds and download times. Featuring a 5-megapixel (2592 x1944) camera with a dual-LED flash, a 2.8-inch QVGA display, and the hugely-successful Symbian S60 platform, the Nokia 6788 allows people to instantly share the things that matter to them most.