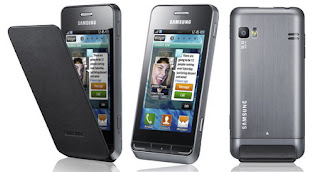 Samsung has announced the launch of the Wave 723 (Model : GT-S7320E), the fourth smartphone based on its open smart phone platform, Samsung bada. The 4th bada powered smartphone, the S7230E Wave 723 combines a crystal clear 3.2-inch TFT-LCD display with an application-centric interface that allows users to seamlessly and directly access applications that support their daily needs and lifestyles. The Social Hub feature helps you stay organized while staying connected with friends and family everywhere, anytime.

Equipped with the latest Wi-Fi (802.11 b/g/n), the Wave 723 also comes with a 5MP camera with LED flash and auto-focus, FM radio, aGPS, Bluetooth 3.0 + EDR, 90MB of onboard memory, and a microSD card slot up to 16GB, and 3.5mm headset jack. Wave 723 is developed based on the bada SDK 1.1. The SDK 1.1 has Auto-UI scaling feature where application developers can reproduce applications to work on Wave 723 from already developed bada Application on Wave with minimum effort. With this feature, more rich applications can be delivered to users in advance.

Samsung Wave 723 (GT-S7320E) will be available starting in September 2010 in Germany and will be gradually rolled out to other European markets including Southeast Asia, the Middle East Asia, and Africa.