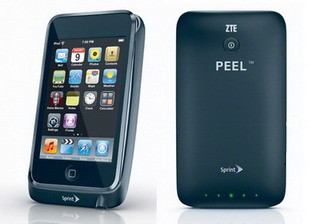 Sprint has announced that beginning on Nov. 14, Sprint customers can attach ZTE PEEL to their Apple iPod touch and connect to Sprint’s 3G network. ZTE PEEL is a unique device that cradles the second- and third-generation iPod touch with a case-like form factor. With universal Wi-Fi compatibility and support for up to two Wi-Fi enabled devices, iPod touch users will have a virtually anywhere, anytime Internet connection that removes the reliance on a Wi-Fi hotspot for a data connection. Customers simply slide their iPod touch (touch-screen face out) into ZTE PEEL, press down on both sides until it clicks into place, and then press the power button located on the back of ZTE PEEL to connect to Sprint’s 3G network.

Key features of ZTE PEEL include advanced security through WEP, an internal antenna and compatibility with Windows 7, Windows Vista, Windows XP, Macintosh OS 10.5, 10.6. No software installation is required for use.

ZTE PEEL will be available beginning Sunday, Nov. 14, through Sprint retail stores and direct ship sales channels, including Web sales (www.sprint.com) and Telesales (1-800-SPRINT1) for $79.99 (taxes excluded). The ZTE PEEL $29.99 monthly service plan from Sprint allows up to 1GB of 3G data on the Sprint network (taxes and surcharges excluded) with no annual contract required.