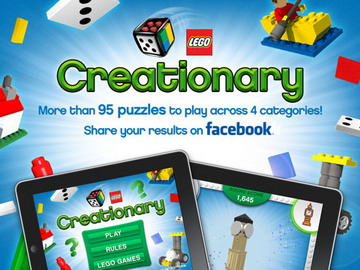 LEGO Systems has announced general availability of the first official LEGO branded application for iPad – a true-to-the-original board game version of Creationary, which tests how quickly players can guess what is being built from LEGO bricks. The free game works on iPad, iPhone and iPod Touch mobile devices.


Players "roll" the LEGO dice to find out which of the 4 randomly selected categories they are guessing: nature, vehicles, buildings or things. The game starts building an object from that category out of LEGO bricks, and players must guess which of the four possible answers is correct by tapping the illustration that they think matches what is being built. The faster players guess correctly, the more points they earn. As the game is played over time, the more difficult it becomes. If players guess incorrectly, the game ends. Scores can be shared with friends via email or on Facebook.

With 100 models available at launch in infinite play combinations, and plans for periodic and seasonal model refreshes, the mobile version of Creationary will delight passionate fans with an on-the-go way to play while also recruiting new fans – and families to LEGO board game play.

LEGO Creationary for iPhone/iPad is available for download FREE on the App Store in the Games category.