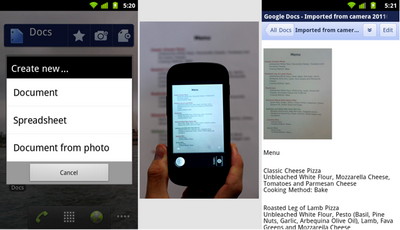 Google has recently announced the new Google Docs app for Android. Some updates have been released for this application. You can now easily filter and search for your content across any Google account, then jump straight into editing docs using the online mobile editors. The mobile application also allows you to easily share items with contacts on your phone, right from within the Android app. The new Google Docs app for Android also allows you to upload content from your phone and open documents directly from Gmail. You can also add a widget to your home screen for easy access to three core tasks: jumping to your starred documents, taking a photo to upload, or creating a new document with one tap.

Last but not least, the app now supports an optical character recognition (OCR) feature. Using the app and your phone’s camera, you can turn photos with text into editable Google documents with the power of optical character recognition (OCR). To enjoy this new feature, you can just create a new ‘Document from Photo' or select the camera icon from the widget, and your converted document will appear in your documents list shortly after you snap the picture. You can also convert photos already stored on your phone by sharing them with the Google Docs app.

According to the developer, OCR does a pretty good job capturing unformatted text in English but won't recognize handwriting or some fonts. However the devs will make it better in the future.

Google Docs app is currently available in English and works on Android 2.1+ phones. You can try it out by scanning the QR code below or by visiting Android Market.