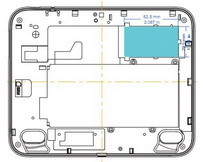 This version of 4G HP TouchPad has a 1.5GHz CPU, faster as opposed to 1.2GHz processor in the original tablet. It's on its way to AT&T, running on HSPA+ rather than LTE network. And now with some official certifications passing through the FCC, we might be seeing 4G HP TouchPad hit the street sooner than later.