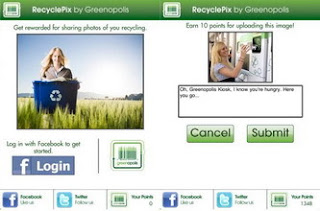 Greenopolis, a subsidiary of Waste Management, has announced the release of RecyclePix, a new social recycling and photo sharing app for iOS and Android devices that rewards users for recycling while tracking your sustainable actions.

To use the app, users simply upload a photo of themselves recycling to instantly win Greenopolis Rewards Points. Users can also earn points through the app by voting on other photos and sharing their acts of recycling on Facebook and Twitter. All points can be combined with those earned from participation in other Greenopolis social recycling endeavors.

Greenopolis Rewards Points can be redeemed for real rewards such as discounts, coupons for entertainment, dining, travel, and more at retailers nationwide.

RecyclePix By Greenopolis iOS app / Android app is available for download FREE on the App Store / Android Market in the Lifestyle category.