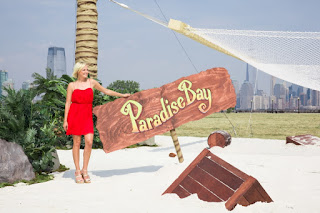 King Digital Entertainment plc (NYSE: KING), a leading interactive entertainment company for the mobile world and creator of the Candy Crush franchise, celebrated the launch of its latest mobile game, Paradise Bay, by bringing the tropical and relaxing themes of the game to life by setting the GUINNESS WORLD RECORDS title for the Largest Hammock in Liberty State Park, New Jersey.

The ultimate symbol of relaxation, the hammock embodies the beauty and charms of the tropical island themed game and brings them to life on an enormous scale. Measuring a huge 65 feet long by 31 feet wide– that's over 10 times the size of a regular hammock – the net of the hammock is large enough to hold 1000 bass-sized fish, could fit 170 people lying head to head, side by side, and is large enough to park 24 New York City taxis fender to fender. 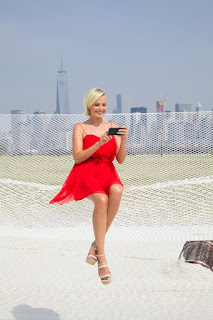 Actress Malin Akerman (Watchmen, Couples Retreat, The Proposal) took time out of her busy filming schedule in New York City to relax on the hammock, as Liberty State Park was transformed into an island-themed tropical paradise. With Malin reclining atop the giant hammock surrounded by tropical palm trees and a sandy shoreline, gaming fans were reminded to take time out during the hustle and bustle of their daily routines and escape to Paradise Bay this fall for a few relaxing moments at the beach.

The giant hammock embodies the core elements of the Paradise Bay game which takes players on a journey through lands of crystal clear waters and the bluest of skies, as they discover exciting new islands, meet a quirky and colorful cast of characters and build and customize their very own tropical paradise along the way.

Paradise Bay is available to download and play for free on the Apple App Store and now Google Play, when you have a few moments to escape to paradise.

Clint Tasker, Lead Designer on Paradise Bay at King Digital Entertainment said:
"We all know life is better while at the beach, so we created a game that transports players to a tropical island paradise – if only for a few minutes each day. And what better way to celebrate the launch of Paradise Bay than by building the world's largest hammock – the ultimate sign of relaxation – with the wonderful and talented Malin Akerman."

Actress, Malin Akerman added:
"As a mom and an actress, my life can be really busy and hectic, and I always look for easy ways I can relax and unwind. One way I do this is through playing games that give me the occasional escape I need. That's why I'm excited to be partnering with King Digital Entertainment to introduce the world to the relaxing, tropical charms of the Paradise Bay game."

About King
King Digital Entertainment plc (NYSE: KING) is a leading interactive entertainment company for the mobile world. It has a network of 340 million monthly unique users as of second quarter 2015, has developed more than 200 exclusive games, and offers games in over 200 countries and regions through its king.com and royalgames.com websites, Facebook, and mobile distribution platforms such as the Apple App Store, Google Play Store and Amazon Appstore. King has game studios in Stockholm, Bucharest, Malmo, London, Barcelona, Berlin, Singapore, and Seattle, along with offices in San Francisco, Malta, Seoul, Tokyo and Shanghai.