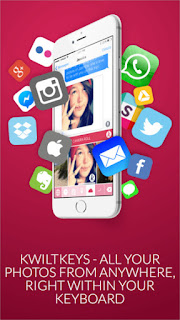 SAN FRANCISCO -- Kwilt, an award-winning mobile media solutions innovator, announced the launch of KwiltKeys for iOS at TechCrunch Disrupt SF 2015. KwiltKeys is the fastest and easiest way to access and share any photo from any source to any app directly through a versatile mobile photo keyboard.

The custom photo keyboard streamlines the photo-sharing experience by allowing users to share photos from their camera roll, Instagram, Facebook, Amazon Cloud Drive, Dropbox, Flickr, Photobucket, Google+ and other sources without ever leaving their mobile app or switching between photo sources.

"Sharing photos has never been easier or faster," said Marc-Antoine Benglia, CEO and Co-Founder at Kwilt. "KwiltKeys organizes all of your photos, from any source, location and date in one convenient and comprehensive photo stream, right at your fingertips."

Unlike other keyboard technologies such as SwiftKey, TouchPal, Swype, Fleksy and QuickType, KwiltKeys gives users direct photo access, right from a custom keyboard.

PRICING AND AVAILABILITY:
KwiltKeys is available for free download on iOS devices and optimized for Apple's new iOS 9.

ABOUT KWILT:
Founded in late 2014 with offices in San Francisco, Calif., and Ottawa, Canada, Kwilt, an award-winning mobile media solutions innovator, gives consumers direct access, right on their mobile, to all their digital photos wherever they are stored—at home, on their mobile, in the cloud and on social networks. For more information, visit: www.kwilt.it