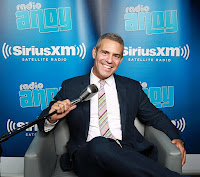 The new exclusive channel, which will be executive produced by Cohen, will feature programming personally curated and presented by the late night talk show host.

Cohen will host Andy Cohen Live, the weekly, two-hour live interactive show during which he will talk about his current obsessions, including what's happening in the world of pop culture and news. Cohen will be joined by guests including celebrities and friends; TV icon and comedian Carol Burnett will be Cohen's first guest on the show's September 14 premiere. Subscribers will have the opportunity to call in to the show.

"SiriusXM has given me the ultimate in uncensored creative freedom: a 24/7 channel to do whatever I want with whomever I choose. I've spent the last few months putting together an amazing lineup of creative and talented personalities with more to come," said Andy Cohen. "I am so excited for listeners to get to know another side of myself, sometimes deep and often shallow, and dive into what's happening in the world with unique and singular voices like Sandra Bernhard, Bevy Smith and Lance Bass, each entertaining forces on the pulse of pop culture who are also a crazy good time. As an aside, I'm thrilled to be next to my hero Howard Stern on the SiriusXM dial."

"I want this show to act as a time capsule, packed with the little curiosities and snapshots of our culture …that everyone can relate to and, hopefully, take them on a journey as well. THAT is Sandyland," said Sandra Bernhard. "I am looking forward to the creative freedom I know I'll have with SiriusXM. Andy Cohen is an old friend, he gets me, and that's a luxury to have in this business. It's a good collaboration and a lot of fun."

"I'm ready to have an unedited, unfiltered, rollicking good time on Bevelations!" said Bevy Smith. "Whether I'm chatting with my celebrity pals or an interesting character from my neighborhood, it's going to be pure B.S., that's Bevy Smith!"

"I've tried for years to be one of the Real Housewives but Andy always said I wasn't bitchy enough. Well wait until he hears the new Dirty Pop I'm bringing to Radio Andy," said Lance Bass. "Every show's going to end with a ton of Chardonnay and a slap fight with my producer. Oh and I'll also have a bunch of my famous friends stopping by to play games, talk pop culture and share their playlists. I can't wait to launch Dirty Pop 2.0 live from New York!"

Andy Cohen Live
Mondays, 10:00 am—12:00 pm ET
A weekly two hour live interactive show, during which Andy Cohen will talk about all of his current obsessions, including what's happening in the world of pop culture and news. Andy will be joined by guests including celebrities and friends. Subscribers will have the opportunity to call in to the show.

Sandyland
Monday—Friday, 12:00 pm—1:00 pm ET
The live daily show will be entertaining, uncensored and unpredictable discussions on topics curated by Sandra Bernhard's varied and broad range of interests with her trademark intelligence and sharp humor. Bernhard will talk about everything from sports, music and artists that she loves, food, travel, history, Judaism, politics, art, fashion, "American oddities" and more. Bernhard will be joined by celebrity friends, including musicians, sports figures, designers and other special guests.

Bevelations
Monday—Friday, 6:00—7:00 pm ET
Bevy Smith, TV personality, lifestyle expert and social media raconteur, will be live on the air each day giving it to listeners straight, no chaser. Forget the status quo, polite conversations and formalities, Bevelations is about sharing what her listeners really want to hear about pop culture, women's issues, dating and sex, music and fashion!

Subscribers will also be able to listen to Radio Andy via SiriusXM On Demand through the SiriusXM App for smartphones and other mobile devices and online at siriusxm.com.